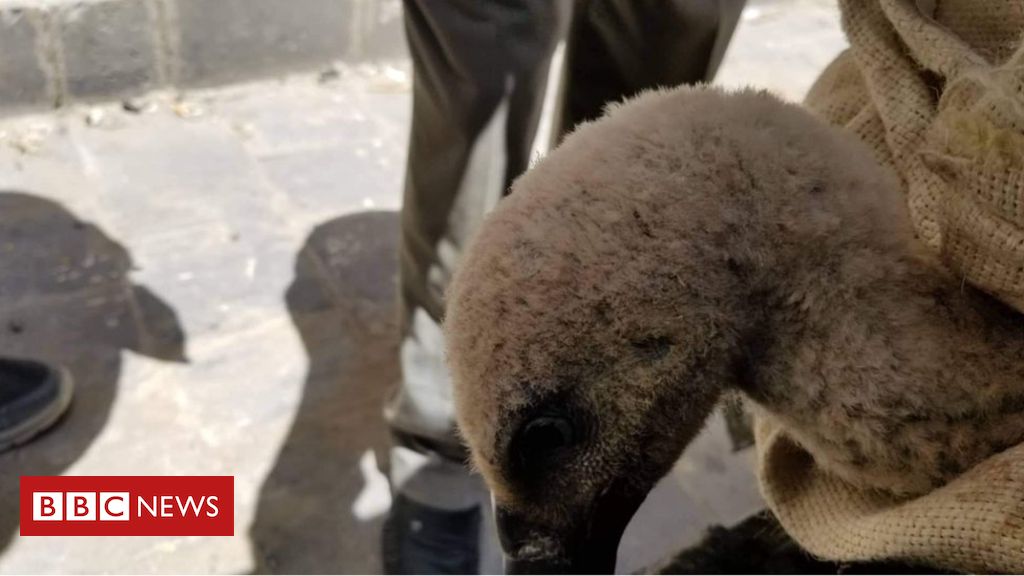 Nelson was in a tight corner, tied up and imprisoned by men who believed he was a spy. It didn’t look good.

When he was captured, they found a satellite tracker attached to his leg, more sophisticated than much of the equipment they had in Taiz, a town on the front line of Yemen’s catastrophic war.

In any war it is bad news to be accused of spying. In Yemen, an isolated, dusty and desperate place, suspicions can race round groups of armed men and harden minds. Even if you’re a vulture.

Nelson was a sad sight in his cell, tied up, obviously weakened and miserable.

He is a big bird, a rare griffon vulture, but he is still classified as immature.

That cut no ice with his captors, a militia loyal to the internationally recognised Yemeni government that is backed by Saudi Arabia. They saw the GPS satellite transmitter on Nelson’s left leg, and assumed the worst.

They believed the vulture was on a mission to transmit military secrets to the rebel Houthis, the group that controls the Yemeni capital Sanaa.

In fact Nelson’s tracker was attached for innocent, conservationist reasons, to monitor where he flew, and to check whether he was still alive.

He was one of 14 vultures who had been given trackers and wing tags back in Bulgaria, where Nelson’s journey began.

Luckily for Nelson, he has friends.

In Bulgaria, a conservation group that fitted the tracker, the Fund for Wild Fauna and Flora (FWFF), was following Nelson’s progress as he worked his way south through Saudi Arabia.

They were not concerned about his odyssey. Young male griffon vultures often fly vast distances before they turn for home.

But back in November 2018 they lost touch with Nelson after he crossed into Yemen.

Nelson was not a spy, but this exotic Bulgarian visitor was building a network of sympathisers who had seen him flapping around Taiz, a badly damaged town with problems so severe that helping a bird, you might assume, would have been a low priority.

This month Taiz has been gripped, like much of Yemen, by the third serious outbreak of cholera since the war started in 2015.

But on 5 April, as the cholera spread, the FWFF in Bulgaria received, they say, hundreds of messages and emails from Yemenis who were concerned about the welfare of a griffon vulture.

A Bulgarian phone number was on Nelson’s tags. Yemenis sent pictures that helped get a positive identification.

The conservationists in Bulgaria marvel that so many Yemenis, trapped in a war that has become, the UN says, the world’s most serious humanitarian emergency, have worried so much about a bird.

Nadya Vangelova from the FWFF said in an email that they were “wonderful people” caring for the bird’s survival, despite the military situation they are facing in Yemen.

But she added that they knew helping Nelson was going to be difficult in a country that was struggling to survive war, cholera and starvation.

Local attempts to help Nelson ran into trouble when the big bird with the satellite tracker came to the attention of a local militia.

They seized Nelson, and took him to a base in Taiz commanded by a man with the nom de guerre of General Salem.

A plucky and determined man called Hisham al-Hoot made the dangerous journey from Sanaa to Taiz. He lobbied General Salem for Nelson’s release, and was allowed to feed the vulture while they waited for a decision.

In Bulgaria the conservationists lobbied the Yemeni embassy, and others in France and Ireland spread the word about Nelson.

The Yemenis were persuaded that Nelson’s tracker was not there to spy on them and he was released. The indefatigable Mr Hoot transported Nelson to Sanaa, where a vet examined the vulture.

Nelson has broken wing feathers and an old injury on his neck. He weighs 4.8kg (10.5lb); to take off and fly he needs to be at least 5kg. His feet are scuffed and the skin on his left ankle shows abrasions from being tied up.

The vulture is being fed with meat and water every hour to try to build him up. In six to eight weeks, if all goes well, he will be strong enough to be released to start the long migration back to Bulgaria.

It may seem strange, perhaps even wrong, to lavish attention, and fresh meat, on a bird in a country where nearly 240,000 people are facing catastrophic levels of hunger, according to the UN.

But the response of Yemenis to Nelson’s misadventures, and the threat to his life, might be better seen as an assertion of their own humanity.

Helping others, doing small favours, worrying about a lost Bulgarian vulture can brighten the most miserable times. Even in war, even in Yemen, even in the world’s worst humanitarian emergency.