Brexit limbo: Hotels, packing boxes and plans on hold for the MEPs 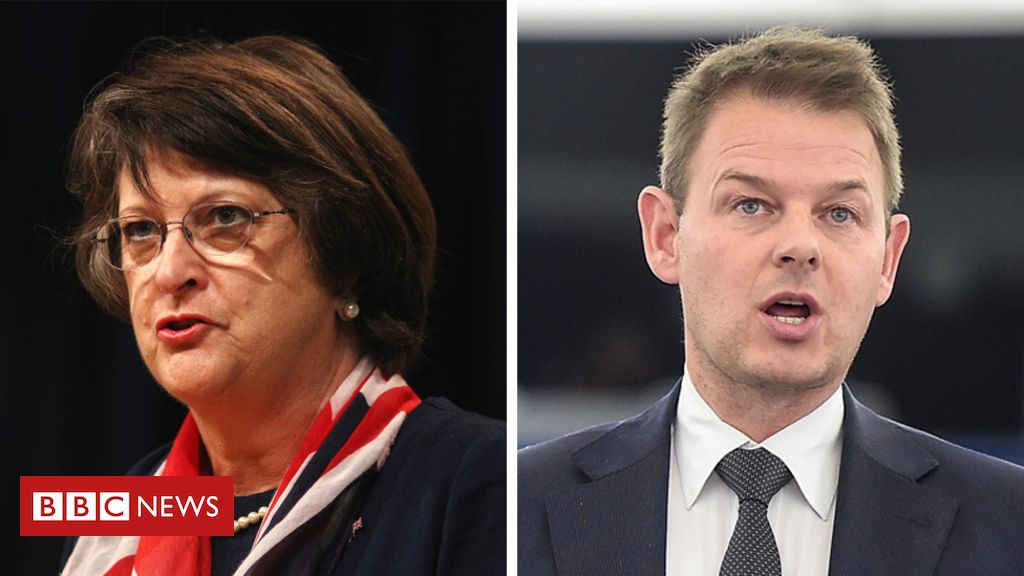 Their offices are full of boxes, they’re living in hotels and don’t ask them when they’re having their leaving drinks. How have the UK’s MEPs been coping with the ever-changing Brexit situation?

It’s the last day of the European Parliament in Strasbourg before the elections in May, but there’s not much last-minute packing for the UK group of MEPs – they’ve been ready to go for nearly a month.

When the UK voted to leave the EU, the country’s representatives in the European Parliament expected to be out of a job on 29 March. Instead they have watched two deadlines pass by as MPs in Westminster failed to agree on the withdrawal deal.

Now a new Brexit date of 31 October means the UK is likely to take part in European elections on 23 May and some MEPs are eyeing an unexpected return to Europe.

But job prospects there could be short-lived. Whenever the UK breaks the Brexit deadlock, they could be sent home. And if the prime minister succeeds in winning support for a deal before polling day, elections could be called off altogether.

MEPs are used to a nomadic life, dividing their time between parliament sessions in Brussels and Strasbourg, as well as their home constituencies in the UK. But many of them feel recent months have taken an already unstable situation to extremes.

Catherine Bearder, Liberal Democrat MEP, says: “Life is never certain as a politician, but this is beyond anything I’ve ever seen before.”

The 70-year-old had been planning a quiet retirement – “painting, gardening, doing yoga” – but said she is back on an election footing now, determined to fight to keep the UK’s place at the European table.

For Nathan Gill, a former UKIP and independent MEP who has now joined the newly launched Brexit Party, the delays have been a blow to the cause he spent the last 15 years of his life on.

He says he was forced to leave his Brussels apartment and move into a hotel after his lease ended. Later he got turfed out of there too.

As UK Prime Minister Theresa May sought the latest extension to Brexit and an emergency EU summit rolled into town, prices rose so much that Mr Gill had to temporarily decamp to Antwerp, some 25 miles (41km) away.

Who are the UK’s MEPs?

Every country in the EU elects representatives to the parliament, which meets in Strasbourg and Brussels. The UK has 73 MEPs, representing each of its 12 regions for five-year terms.

Their job is to debate and to help decide on EU laws, as well as scrutinising the work of EU institutions.

The last election saw 19 Conservatives elected, 20 from Labour and 24 from UKIP – although 19 UKIP MEPs have since left the party and one was expelled.

The Greens have three MEPs, the SNP has two and there is one each from the Liberal Democrats, Democratic Unionist Party, Sinn Fein, the Ulster Unionist Party and Plaid Cymru.

The Brexit Party is not the only new party planning to contest these European elections. Change UK – formed by former Labour and Tory MPs, initially under the name The Independent Group – says it had 3,700 people applying to be candidates.

MEPs themselves will receive a transitional allowance when their term ends, equivalent to a month’s salary for every year they have served. But across the political spectrum, they are united in feeling that staff have been treated badly.

Each MEP has a budget to hire assistants, with up to three in Brussels as well as staff in their home region. Information about the future for these staff members is scarce and always changing, MEPs say.

Contracts could not be extended until Brexit extensions were officially confirmed by the European Council, usually at the last minute as negotiations went to the wire.

For some staff, the last-minute deadline extensions meant losing redundancy pay as they had already accepted jobs elsewhere. Others who remain are sleeping on sofas as their apartment leases run out.

“It’s very brutal from a staff point of view,” says Conservative MEP Daniel Dalton. “You’re in one day and out the other and your staff are out with you.”

Green MEP Jean Lambert says staff had to be made redundant and offices closed as the original Brexit deadline loomed in March. But the party kept in place a contingency plan in case the UK took part in European elections.

“We’ve got a plan A and a plan B, which is more than the government has,” she says – although she plans to retire as an elected representative.

If the UK does elect MEPs, what will they do in a potentially short-lived return to Brussels and Strasbourg?

Some Brexiteer politicians such as Nathan Gill warn that they plan to make the EU nations “regret” the UK MEPs’ return.

Mr Gill says the Brexit Party hopes to work with other anti-EU and anti-euro parties across the continent, such as the far-right Alternative for Germany (AfD) and Italy’s anti-immigration League party, to cause disruption.

“We want them to realise they should have just let us go,” he says. “They don’t need this thorn in their side.”

But Conservative MEP Mr Dalton, who backs the government’s Brexit withdrawal agreement, says it would be “completely counter-productive”.

He says British politicians have often failed to understand that the EU Parliament is based on compromise, so the adversarial politics of Westminster fall flat. “All it does is annoy people,” he says. “They’re much more likely to get more stubborn.”

UKIP MEP Stuart Agnew is another who has postponed retirement to take part in the elections, if they happen. He says he was surprised that Westminster MPs had let the Brexit deadlock get to this point.

“I would have lost a bet. I thought they would have banged heads together, that the Conservatives wouldn’t want European elections and neither would Labour. I was wrong,” he says.

Other MEPs have made firm decisions not to stand again but have still been left bewildered by recent weeks.

David Martin, Labour MEP, says he intends to do academic lecturing on the EU and trade policy, but had been struggling to agree a start date.

“The Brexit negotiations will be a really good case study in how not to negotiate with the European Union,” he says.

He has also been puzzling over a unique issue of etiquette: when should Brexiting MEPs say their goodbyes?

As Mr Martin puts it: “You don’t want to have a farewell dinner and say goodbye to everyone, and still be there the next day.”