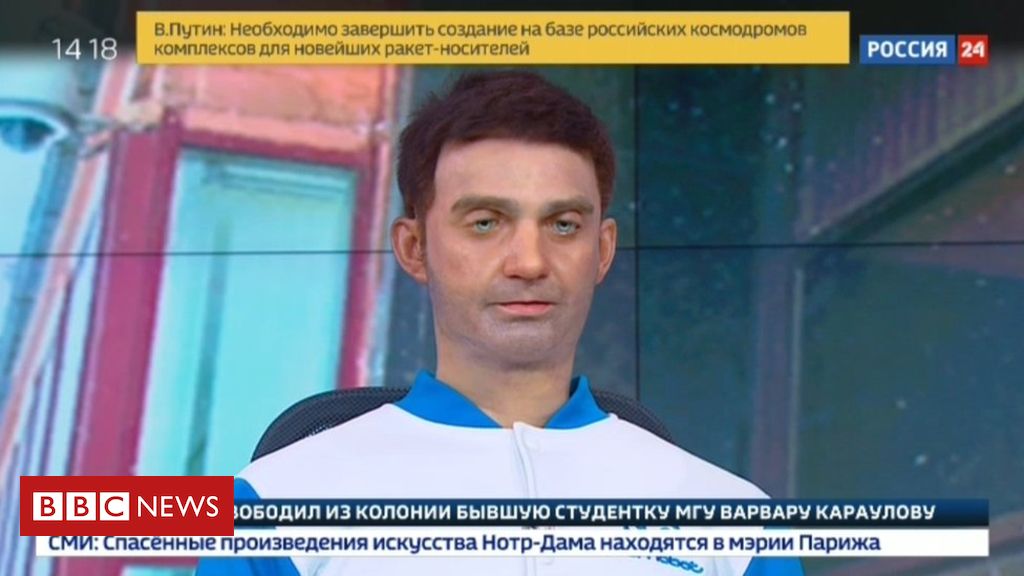 Russian state news channel Rossiya 24 has introduced a robot presenter for some of its bulletins.

‘Alex’ has already caused a stir, with some viewers complaining about his appearance and accusing him of peddling political propaganda.

The robot was developed by Promobot in the city of Perm. His silicon head is modelled on the face of the company’s co-founder Alexei Yuzhakov.

At the moment, the robot anchor can only move his facial features and neck.

However, the final robot will have fully mobile limbs as well.

Production of the robot began in 2017 and should be fully complete later this year, according to Promobot.

Rossiya 24 said its newest presenter was of Russian origin with “software and almost all of its components produced inside the country”.

Alex has delivered a number of bulletins for the channel, presenting news items about agriculture, a nuclear technology forum and micro-finance.

“I should note that at a technological innovations exhibition, the main hero was me, robot Alex,” he said, with a smile, when presenting a segment about an artificial intelligence conference in Moscow.

But an item that appeared to have all the hallmarks of a smear against opposition activist Ilya Yashin was criticised.

“Meet Rossiya 24’s new anchor, robot Alex. Artificial intelligence, a talent for propaganda and an integrated fake news generator is available right in your box,” one viewer said on Twitter.

“Alex, if they are holding you hostage and force you to drink alcohol, wink three times when you go on the air!” urged a viewer online.

One viewer took a shine to Alex and said he was a “very nice robot” while another said his deployment was “an interesting trend”.

Most observers think on-air Alex is a temporary stunt to inject some fun and promote innovative Russian technology in TV news.

“For the first time a robot appeared as a news presenter on TV channel Rossiya 24,” the channel said on its website.

“It is for TV viewers to decide how he performed. Could robots replace journalists?” it asked.