Ukraine election: What a TV box set may tell us about the future 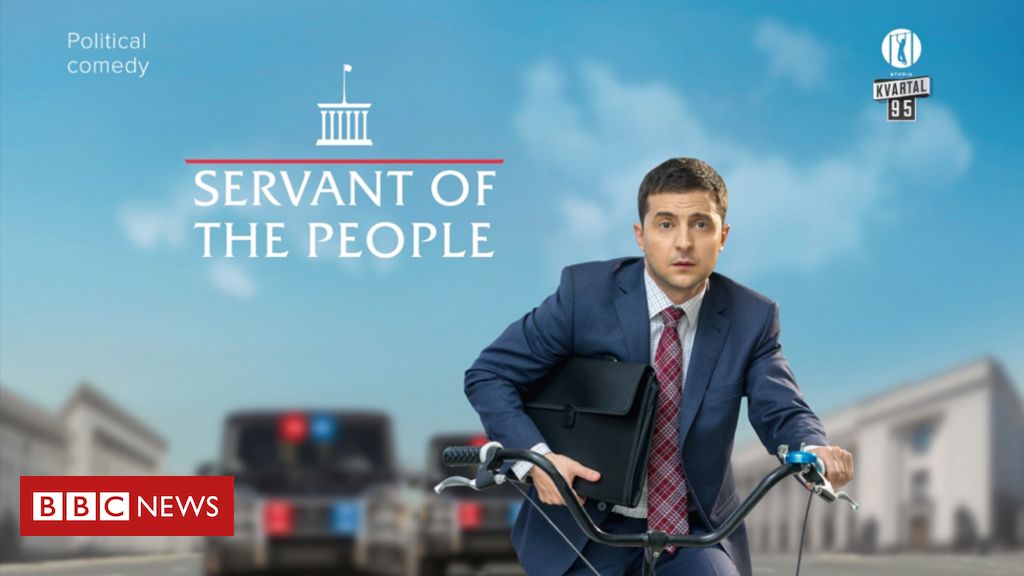 The likely winner of Sunday’s presidential election in Ukraine hasn’t run a conventional campaign, so reporters have been looking for clues about the future in a TV drama in which he plays the leading role.

There aren’t many jobs where you can put your feet up and work your way through a TV box set without feeling the slightest bit guilty. But here in Ukraine, putting in the hours in front of the screen has become one way of trying to understand what has been at times been a baffling election.

“How far through it are you?” has become a familiar refrain, muttered between journalists on the fringe of campaign events.

The required viewing is a political satire called Servant of the People, and getting fully across it takes real commitment. The show – think The West Wing, with jokes – has just entered its third series, and there are nearly 50 episodes.

Confused? Well the blurring of fiction and fact doesn’t seem to bother Ukrainians, in fact it appears to have brought clarity. All the polls suggest that Zelensky – a 41-year-old Monty Python fan – is going to defeat the incumbent, Petro Poroshenko, and easily win Sunday’s presidential election run-off.

Zelensky has effectively run an “anti-campaign”. He’s avoided political rallies and speeches, and instead continued performing slapstick routines with his comedy group. There’s been very little in the way of policy or ideas, apart from a promise to be new and different. Serious interviews have been few and far between, and there haven’t been many press conferences either.

So the minutiae of the often farcical episodes of Servant of the People have been elevated, and dissected – sometimes by quite serious publications – for clues as to what might lie ahead in a Zelensky presidency.

How much, for example, should we read into the fictional president’s showdown with the International Monetary Fund? Some are worried that Zelensky might turn out to be a populist and seek to go back on the IMF’s strict conditions for loans.

And then there’s a sequence where Zelensky’s character pulls out machine guns and shoots all of the MPs in parliament. Maybe that’s an encouraging sign that he’s going to be tough on political corruption?

Every time presidential candidate Zelensky has dipped his toe into conventional political campaigning it’s not gone well. He’s been accused of being lightweight and jokey – which of course is a danger, if you’ve spent your life, as he has, working as a comedian.

So while Petro Poroshenko has made stops across Ukraine and been a regular in TV studios, Zelensky has stayed away. His chosen method of communication has been social media, where he posts a steady stream of upbeat videos – a mix of him working out in the gym, joking with friends, and getting briefed by a team of advisers. “He’ll learn – and be surrounded by the best,” is the message we’re supposed to take away.

Zelensky’s success so far is due only in part to Zelensky himself. Opinion polls here in Ukraine have for a long time been unanimous about one thing – that people really hate their politicians and political system. A recent survey showed that just 9% of people here have confidence in their government. That’s a world low.

So Zelensky represents, in part, the protest vote. Two fingers being raised against the MPs and leaders who have dominated this country’s recent history, and whom many see as corrupt – in the pockets of a handful of rich oligarchs.

Poroshenko is finding out that being the candidate of stability and security is not a vote winner if people are fed up with a status quo of economic hardship and a seemingly endless war with Russian-backed forces in the east. It’s not hard to see why the telegenic Zelensky is attractive to voters, however light he is on substance.

There is another TV show that has become a must-watch during this campaign. It’s an episode of the futuristic dystopian series called Black Mirror. First broadcast in the UK six years ago, it tells the story of a cartoon bear called Waldo, who stands in an election after becoming famous on a TV show for mocking politicians.

Zelensky has spent his career joking about politicians, so people have been tempted to draw parallels.

It’s a comparison aided by the fact that he provided the Ukrainian voiceover of Paddington Bear in the recent hit films. But the voice of Paddington looks set to go one better than Black Mirror’s cartoon bear. Waldo ended up coming second. In Ukraine the comedian is set to win.

With one eye on the exit, Poroshenko’s supporters in parliament are not taking it well. One told me dismissively, “He doesn’t even know where Peru is.”