Labour’s ruling body is being urged to ensure a “clear commitment” to a public vote on any Brexit deal is included in its European elections manifesto.

More than 90 MPs and MEPs are writing to members of the National Executive Committee, which will decide on the manifesto on Tuesday.

Labour must campaign “without caveats” as “the only viable alternative to Nigel Farage’s Brexit Party”, they say.

But some Labour MPs are opposed to holding another EU referendum.

And nine shadow cabinet members thought to be sceptical.

Labour agreed a policy at its last conference that if Parliament voted down the government’s deal or talks end in no deal, there should be a general election.

But if it cannot force one, it added, the party “must support all options remaining on the table, including campaigning for a public vote”.

However it has been reported that Labour’s leaflets for the European Parliament elections do not mention pushing for another referendum.

Senior Labour backbencher Hilary Benn questioned why no mention was made of a “confirmatory referendum” – despite the party twice supporting one in Commons votes:

The party’s deputy leader Tom Watson has also argued for Labour to promise another referendum, if it is to counter the electoral challenge posed by Mr Farage.

The letter signed by some Labour MPs to NEC members, seen by the BBC, says the party must campaign in the European Parliament elections on a “clear position on Brexit.”

The letter reads: “Our members need to feel supported on doorsteps by a clear manifesto that marks us out as the only viable alternative to Nigel Farage’s Brexit Party.

“We need a message of hope and solidarity, and we need to campaign for it without caveats. To motivate our supporters, and to do the right thing by our members and our policy, a clear commitment to a confirmatory public vote on any Brexit deal must be part of our European election manifesto.

“We understand the many different pressures and views within our movement, but without this clear commitment, we fear that our electoral coalition could fall apart.”

Former Labour communications chief Alastair Campbell told the BBC’s Political Thinking with Nick Robinson podcast: “Whatever emerges from the process going on now is going to be so different from what was promised, it has to go back to the people for a confirmatory vote.

“Now I would like it if they [Labour] would then say, if that were to happen, the Labour Party would campaign vigorously to stay in the European Union. But the first bit’s fine for me. If they don’t do that first bit then I’d find it very difficult to vote Labour and that would be the first time in my life.”

He suggested that, without such a commitment, the party would get “marmalised” at the European elections.

But there is opposition to another referendum within Labour, amid concern about alienating Labour voters who backed Leave.

Earlier this month 25 Labour backbenchers wrote to Mr Corbyn, urging him to rule one out and arguing it would “be exploited by the far right, damage the trust of many core Labour voters and reduce our chances of winning a general election”.

Party chairman Ian Lavery offered to quit the shadow cabinet, after twice defying orders to vote in favour of another referendum.

But polling for a project on party membership led by Prof Tim Bale of Queen Mary University suggested more than 70% of Labour’s members backed a second referendum.

And Tom Watson has argued that about 80% of Labour MPs backed a confirmatory referendum of some sort.

Shadow foreign secretary Emily Thornberry told BBC Radio Kent that, “whatever happens” with Brexit, “we will need to put it to the people again”.

She added: “We’ve got to a stage where we feel that any deal is so controversial and may well be so far from what people voted for when they voted to leave, that we think that it is probably appropriate… that we say to the people, ‘Is this what you wanted?’

“We just want to check. Because if it isn’t, then let’s stay.” 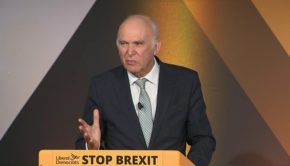